Marking the first large-scale artistic collaboration between the United States and Cuba, the Cuban American Youth Orchestra (CAYO) embarks on its debut full orchestra tour next spring: May 20-27, 2019.

Presented by Classical Movements—the world’s leading concert tour company to Cuba—in association with the Cuban Institute of Music and the National Center for Concert Music, CAYO’s “Juntos en Armonía/Together in Harmony” tour sees the newly formed ensemble—approximately 40 American and 40 Cuban student musicians, all aged 18-24—make its debut in Havana and other provincial destinations in the country.

Under the baton of lauded conductor and pedagogue James Ross, CAYO performs a program showcasing the world premiere of a new composition by the island republic’s Guido López-Gavilán, commissioned by the Paulus Fund in conjunction with the American Composers Forum.

Building on the success of pilot programs conducted over the past year, CAYO’s inaugural tour harnesses the power of cultural diplomacy to support Cuban musicians and promote harmony and understanding between the U.S. and her long-estranged neighbor.

A non-profit cultural exchange program, CAYO is the brainchild of Executive Director Rena Kraut. She explains:

“The 2019 ‘Juntos en Armonía’ tour will be an historic collaboration of young Cuban and American musicians, signaling mutual goodwill and a desire to grow a relationship between our two countries. The culmination of an idea that began with the 2015 Minnesota Orchestra tour to Cuba, CAYO is a testament to the power of cultural diplomacy, giving voice to the next generation to create a better world through music.”

According to Neeta Helms, Founder and President of Classical Movements:

“CAYO’s tour epitomizes to our Cuban partners the ultimate expression of friendship through music. Classical Movements is inspired to see the lasting impact of our work in Cuba help this enormous project flourish—bringing together Cubans and Americans, once again, in the joyous act of music-making.”

With the guidance of top Cuban and American institutions, educators and performers, CAYO’s members will be selected by audition over the coming months. Kraut notes: “Our intent is to find not just the best musicians, but the students most open to this cultural exchange experience, and most poised to act as ambassadors for their country.” In preparation for their first performances together, the 80 college-aged musicians will rehearse with handpicked faculty mentors from both countries: Cuban professionals from local institutions, and 11 members of the Minnesota Orchestra, including first associate concertmaster Susie Park, principal flute Adam Kuenzel, principal oboe John Snow, principal horn Mike Gast, and principal trumpet Manny Laureano. During their week together in Cuba, besides helping to lead the young musicians in sectionals, lessons, and masterclasses, the U.S. mentors will also perform alongside their Cuban counterparts in a special chamber concert.

Like Rena Kraut, herself an active orchestral and chamber musician as well as a dedicated educator, all 11 of the U.S. faculty mentors were members of the Minnesota Orchestra three years ago, when it became the millennium’s first U.S. orchestra to perform in Cuba, a project also organized by Classical Movements. Over five intensive days in Havana that saw the orchestra give two sold-out concerts, work with high-school and college students, play side-by-side with a conservatory youth orchestra, and jam with local musicians and dancers after hours, they experienced the value of cultural diplomacy firsthand. As the New York Times reported, the opening concert “was greeted not only as a rare chance to hear an orchestra from overseas, but as a symbol of the rapprochement between the United States and Cuba.” It was after witnessing the benefits of such bilateral collaboration for the young musicians involved that Kraut determined to create further opportunities for cultural youth exchange between the two countries, and the seeds of CAYO were sown.

Before embarking on CAYO’s first full orchestra tour, Kraut instigated a number of initial pilot programs. Minnesota Orchestra Music Director Osmo Vänskä was an early supporter and advisor, and excitement around CAYO grew rapidly, beginning with 2017’s Fall Academy. Eight handpicked, pre-professional string players from Havana and Minnesota convened for a week of music and leadership training in Minneapolis, crowned by performances side-by-side with principals of the Minnesota Orchestra to standing room-only audiences at the city’s Orchestra Hall, as well as on American Public Media’s Performance Today. As Agence France-Presse reported, the warm welcome extended to the Cuban musicians even saw two of them receive instruments. Kraut describes the Fall Academy as “an institutional, educational, and cultural success,” adding: “We were thrilled to have Cuban music played in our city, watch relationships between our two countries grow, and bring our mission of arts diplomacy to life.”

Kraut then invited the Cleveland Institute of Music’s Heilerin Quartet to represent CAYO and the U.S. in an open-air festival of Mozart string quartets in Havana. The trip was opened up to board members, associates, patrons, and interns from the “Social Venture Partnerships in Action” class from the University of Minnesota’s Carlson School of Management, from which young intern Kristina Van Deusen recalls:

“Between countries, the barrier is usually the policy and language: it is hard to visit a certain country under specific policies and it is hard for people to interact with the locals if one does not speak the local language. However, with music diplomacy there is no such problem. When the concert took place in the courtyard of the neighborhood in old Havana, the quartet created a small corner of peace in the chaotic town. People with different skin color, speaking different languages, coming from different backgrounds, doing different jobs all stopped by and enjoyed the universal language of music together. This is something special about music diplomacy that nothing else can achieve.”

Next, for this year’s Spring Academy, CAYO invited four pre-professional Cuban wind players to take part in a week-long residency in the Twin Cities. Because of new travel restrictions, created by the suspension of visa services at the U.S. Embassy in Havana, only those Cubans holding dual nationality with Spain were eligible for selection. Nevertheless, the program once again fulfilled its mission with aplomb. As Minnesota Public Radio reported, the four talented young artists gave several informal performances, one of them after a Minnesota Orchestra concert; performed at local Latino-majority schools; took part in masterclasses; performed and participated in an open Q&A about Cuban entrepreneurship at the Carlson School of Management; and explored cutting-edge performance facilities at the Wenger Corporation headquarters. Their residency culminated with a spontaneous international jam session, when Cuban musicians Elio Hernández Rojas and Oscar Cruz joined renowned organist Cameron Carpenter onstage after his appearance with the Minnesota Orchestra.

Finally, by way of an upbeat to the “Juntos en Armonía” tour, CAYO took an arts diplomacy delegation to Cuba earlier this month, to participate in cultural exchange and continue to build community. Kraut explains:

“We were focused on creating performance and travel opportunities for Cuban pre-professional musicians while we were in Cuba. They spent time alongside American citizens, learning what our cultures share and how we are unique. We also continued to lay the groundwork for the May 2019 tour by building friendships and trust.” 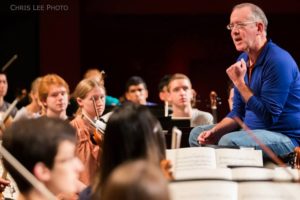 Now in his inaugural season as Music Director of Virginia’s Alexandria Symphony, James Ross also serves as conductor of Spain’s Orquestra Simfònica del Vallès, as a member of the conducting faculty at New York’s Juilliard School, and as Orchestra Director of the National Youth Orchestra USA at Carnegie Hall. Besides holding previous positions as Assistant Conductor of the Boston Symphony and Music Director of the Yale Symphony, he has led ensembles including the Kennedy Center’s National Symphony Orchestra, Leipzig Gewandhaus Orchestra, Royal Stockholm Philharmonic, and Les Arts Florissants. He recently completed a 16-year tenure as Professor and Director of Orchestral Activities at the University of Maryland.

Classical Movements has worked in Cuba, on and off, since 1995. In 2010, responding to revived interest, Classical Movements resumed touring to Cuba, curating unique and truly meaningful experiences for more than 25 esteemed musical ensembles, and thereby becoming the world’s leading concert tour company to Cuba. After President Obama announced the resumption of diplomatic relations with the republic in 2015, Classical Movements produced an historic tour for the Minnesota Orchestra, the first professional U.S. orchestra to perform in Cuba in more than 15 years. 102 musicians performed two sold-out concerts at the Teatro Nacional, receiving standing ovations from enthusiastic and emotional audiences.

The premier concert tour company for the world’s great orchestras and choirs, Classical Movements creates meaningful cultural experiences through music in 145 countries. An industry leader for over a quarter-century, Classical Movements organizes more than 60 tours every year, producing some 200 concerts every season. Producer of two international choral festivals—Ihlombe! in South Africa and Serenade! in Washington, D.C.—and the Prague Summer Nights: Young Artists Music Festival, in addition, Classical Movements’ Eric Daniel Helms New Music Program has commissioned over 70 works from Grammy, Oscar and Pulitzer Prize-winning composers. Winner of Americans for the Arts’ BCA10: Best Businesses Partnering with the Arts Award, since its founding in 1992, as a truly global company, Classical Movements remains committed to facilitating cultural diplomacy across the world—promoting peace through the medium of music.