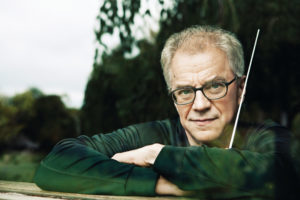 Osmo Vänskä, the Minnesota Orchestra’s tenth music director, is renowned internationally for his compelling interpretations of the standard, contemporary and Nordic repertoires. In addition to the Orchestra’s historic tours of South Africa and Cuba and performances across Europe, he has led the Orchestra in appearances at New York’s Carnegie Hall and Lincoln Center, Chicago’s Symphony Center and community venues across Minnesota.

Vänskä has recorded extensively on the BIS and Hyperion labels. His Sibelius albums with the Lahti Symphony Orchestra for BIS have amassed numerous awards. His first-ever complete recording of The Tempest won the 1993 Prix Académie Charles Cros, and his disc of the original version of the Sibelius Violin Concerto with Leonidas Kavakos won 1991 Gramophone Awards for Record of the Year and Best Concerto Recording.

Vänskä served as Minnesota Orchestra music director from 2003 to 2013, resigned during the organization’s labor dispute, and accepted reappointment to the position in May 2014.

Honors and distinctions awarded to Vänskä include an honorary doctorate from the University of Glasgow. In May 2002 he was honored with a Royal Philharmonic Society Award for his outstanding contribution to classical music during 2001. Musical America named Vänskä 2005 Conductor of the Year, and in 2008 he received an honorary doctorate from the University of Minnesota as well as a Champion of New Music Award from the American Composers Forum. In 2010 he received the Ditson Award from Columbia University, honoring him in particular for his support of American music, and was named by the Minneapolis Star Tribune as its 2010 Artist of the Year.