LIVE CONCERT PRESS DURING THE TIME OF COVID

“Some shows are in spots that may be more appealing than a concert hall. You can enjoy Bach or Billie Holiday amid boxwoods at performances put on by Classical Movements in the Secret Garden of the Rectory on Princess Street in Old Town. The lineup includes choral music, cabaret, jazz, opera, tango, and more.”

Classical Movements, a global presenter of concerts were among the many who had to make adjustments during the pandemic.  One of its major contributions was the beginning of their outdoor concerts in The Secret Garden, which is an intimate space located at the organization’s headquarters in Alexandria, VA.  It would be safe to say that President and Founder Neeta Helms and Classical Movements were the very first to begin presenting live concerts during the pandemic, when others were still quite reluctant to do so. What is special about this concert is the  world premiere of B. E. Boykin’s “Stand Up.” Commissioned by Classical Movements’ Eric Daniel Helms New Music Program, the work is in honor of the activist and educator Mary Church Terrell, which will be given its world premiere with Scott Tucker and the Choral Arts Chamber Singers.

Top Things to Do This Summer in Alexandria
Caroline Secrest, Visit Alexandria | May 6, 2021

Check out #3 on this list of “Top Things to Do This Summer in Alexandria, VA”

“Classical Movements will present two afternoon performances of “Hallelujah! Gospel & Choral Favorites with Camerata Baltimore” on Dec. 19 at 1 and 2:30 p.m. in the Secret Garden at the Rectory, 711 Princess St. in Alexandria, Virginia. The program of gospel music, spirituals and classical repertoire in celebration of Hanukkah, Kwanzaa and Christmas includes “Hallelujah” from Handel’s “Messiah,” Saint-Saëns’s “Christmas Oratorio” and works by John Rutter, Undine Smith Moore and Amy F. Bernon. Seating will be socially distanced and masks are required. Tickets are $45.”

“Social distancing has affected every facet of life from work, to education, to entertainment. Classical Movements is countering that effect, introducing live classical music in a socially distanced setting. As musicians perform underneath a pergola surrounded by lush foliage, the Secret Garden at The Rectory series is becoming the new social hub for all Alexandrians.”

“Music has the power to unite even the most uncommon of folks, and there is a poetic irony about unity during times of necessary separation, but that separation makes the power of music all the more relevant right now. Neeta Helms, Founder and President of Classical Movements, agrees, ‘We want to make the Covid winter as beautiful and happy as possible… We should just spread the joy and light that we can.’”

The world is loud. These upcoming classical music performances will give you some comfort.
Michael Andor Brodeur, The Washington Post | October 14, 2020

Only live Classical Pick for October:
“With the new season comes another change as the Alexandria-based Classical Movements refreshes its series of socially-distanced chamber concerts with a new name and 22 more performances, starting on Halloween and continuing through December 19.

[…] That evening, they’ll clear the cobwebs for “A Venetian Halloween,” featuring NSO musicians playing an autumnal chunk of Vivaldi’s Four Seasons as well as Puccini’s “Crisantemi.” (If this isn’t a perfect opportunity to step up your mask game, I’m not sure what is.)”

The Score: Seasons of Change
The League of American Orchestras, Symphony Magazine | Fall 2020

“With most orchestral touring on hiatus due to Covid-19, tour organizer Classical Movements looked closer to home for a suitable performance venue, and found one in its back¬yard: the garden outside its offices in Alexandria, Virginia. In July, Classical Movements President Neeta Helms launched “Sounds of Hope and Harmony,” a series of one-hour outdoor chamber concerts featuring musicians from the Al¬exandria Symphony Orchestra and National Symphony Orchestra, among others, in a wide range of music.”

“While virtual programming has blossomed, there have been few attempts to return to live, in-person performance. Alexandria, Virginia, appears to be the area leader, with outdoor, small-ensemble performances by Alexandria Symphony Orchestra members planned for this fall and the 18-concert Sounds of Hope & Harmony series successfully launched in the Rectory’s secret garden by orchestra tour company Classical Movements.”

“The chance to see talented musicians up close in an intimate setting is also rare in the realm of classical music, where massive concert halls and pricy tickets are standard. Classical Movements is making music more accessible and, in the process, hopes to remind audiences why live performances are so valuable.”

“The Coalition for African Americans in the Performing Arts and Classical Movements will be joining forces to present a unique concert as part of the “Songs of Hope & Harmony” series on August 29, 2020.

“The showcase will feature soprano Alexandria Crichlow and baritone V. Savoy McIlwain alongside pianist Dr. Lester Green. Pamela Simonson will narrate the concert performance. The event is set to take place in Alexandria, Virginia in honor of the March on Washington back in the 1960s.”

When music lovers envision a night at the symphony, they picture a stage filled with 80 to 100 players arrayed in close proximity. Obviously that hasn’t been possible in the U.S. for a while due to the coronavirus, and won’t be for some time. Major orchestras in Boston, Chicago, Cincinnati, Los Angeles and elsewhere have canceled their classical seasons through year end or later.
Given the right conditions, more major orchestras should be taking similar steps. There’s a large and artistically rewarding repertoire on a smaller scale that could be played, where it is safe to do so, before mask-wearing, socially distanced listeners, from string quartets and other chamber music to opera overtures, serenades and symphonies. Doing so now would allow arts presenters to return to their core mission: putting on live concerts in front of audiences. And it would enable at least some orchestra members to perform and some concertgoers to re-experience the joys of live music-making. These events might also offer opportunities to experiment with alternative onstage placements before moving to the next phase with a full symphony orchestra.

At the very least, orchestra members could play chamber music outdoors while the weather is good. Classical Movements, a concert tour organizer, has sponsored seven such events in Alexandria, Va., since June with no reported spread of the virus.

A critic’s suggestions for music to fill the dog day
Michael Brodeur, The Washington Post | July 29, 2020 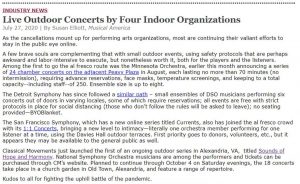 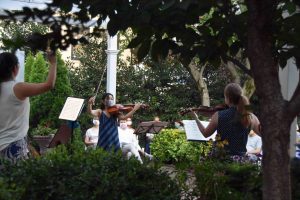 “I’m really looking to check out one of these intimate garden concerts put on by this concert tour company Classical Movements in Alexandria […] they’re holding it outdoors in what they call the ‘Secret Garden’ at their facility on Princess Street and that sounds really magical and I’m looking forward to learning more.”

“Concerts are slowly making a comeback and this summer head to a very special show. Concert tour company Classical Movements is putting on a series of intimate garden concerts starting on Saturday.”

The best things to do — virtually and in-person — while quarantined in the D.C. area
Going Out Guide Staff, The Washington Post | July 23, 2020

“For classical music fans missing the thrill of live performances, an unlikely destination is filling the void left by the Kennedy Center and Strathmore: A 235-year-old rectory in Old Town Alexandria. Classical Movements began holding concerts in the courtyard behind its headquarters in June, with socially distanced seats allowing up to 43 people (singles or couples) to attend. This Saturday, a seven-week series of chamber, opera, choral and jazz performances begins with string quartets and cello duos by musicians from the National Symphony Orchestra. Beethoven, Bartok and the Beatles are all on the one-hour program.”

The concert tour company Classical Movements, based in Alexandria, Virginia, will present eighteen intimate, socially-distanced concerts and recitals from late July through early October at the Secret Garden…

“The secret garden of the Rectory, 711 Princess Street in Old Town Alexandria, Virginia, is the venue for Classical Movements’ Sounds of Hope & Harmony series of intimate and socially distanced Saturday-evening concerts. On July 25 at 6 and 7:30 p.m., cellists Eugena Chang and Britton Riley and a quartet made up of violinists Alexandra Osborne and Angelia Cho, violist Mahoko Eguchi and cellist Rachel Young — all National Symphony Orchestra musicians — will give one-hour performances of works by Barrière, Bartók, Bologne, Beethoven, Joplin and other composers.”

Four summertime strolls: Where to take them and what to listen to
Michael Brodeur, The Washington Post | July 15, 2020 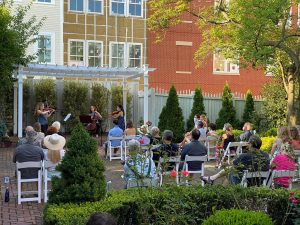 “If you happen to be biking the Mt. Vernon Trail on July 25, consider locking up in Old Town Alexandria that evening as orchestral touring company Classical Movements launches “Sounds of Hope & Harmony,” a new series of 16 concerts in its socially distanced “secret garden.” I covered the company’s first go at a pandemic-defying outdoor concert (spoiler: it was great!), and its forthcoming programs (Aug. 1, 8, 15; Sept. 12, 19, 26; and Oct. 3) will reach beyond chamber music to include opera, jazz and even choral works.

This first date will bring together players from the National Symphony Orchestra to celebrate “the four B’s” — Barrière, Bologne, Bartók and Beethoven. (And especially that last guy, whose big sesquicentennial has been all but ruined by the pandemic.) Oh, and the ride over is as good a time as any to brush up on your Joseph Boulogne — a.k.a. Chevalier de Saint-Georges — whose String Quartet No. 3 in G Minor is a particular treat on the program.” 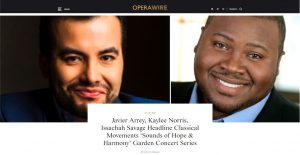 The series will feature 18 concerts at the Secret Garden of the Rectory on Princess Street in Alexandria, Virginia.

“The classical musicians wore jeans and khakis, not tuxes. Audience members stood six feet apart — for now, plush concert hall seats are a thing of the past. It wasn’t what anyone was used to, but for one afternoon, the music was back.

“‘These are great artists. For them, performing is sort of an essential thing,’ says Neeta Helms, Classical Movements’ founder and president. ‘And there’s nothing like live music.’”

Going to my first concert of the pandemic felt like preparing for battle. Then I got there.
Michael Andor Brodeur, The Washington Post | June 22, 2020

Classical Movements isn’t in the business of throwing garden parties, but its fledgling attempt to bring music back to real life, led by founder Neeta Helms, was an ambitious model for what live music might look like for the foreseeable future.

Read the full review of our “Sounds of Hope and Harmony” concerts here.

It was the first time this critic has participated in such an event since early March. What a difference in perspective just three months can offer during a pandemic. Rain had scuttled the three concerts scheduled for the morning, but the skies cleared just in time for the first one in the evening.

Soon You Will Be Able to Go to an Actual Concert in Alexandria
Rob Brunner, The Washingtonian | June 11, 2020

On June 20, musicians from the National Symphony Orchestra, Alexandria Symphony, and other local ensembles will perform in the garden of the Rectory on Princess Street. This is not a live-stream event or something informal you watch on somebody’s porch: It’s an actual concert with tickets and a program and everything—a once-cherished ritual that now feels like a dim memory from a distant era. 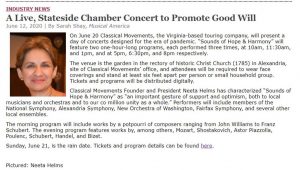