AROUND THE WORLD WITH CLASSICAL MOVEMENTS

The tour would have featured two new compositions by Vietnamese composers Do Hong Quan and Tran Manh Hung, commissioned by the Classical Movements, the company that helped shape the orchestra’s 2015 tour of Cuba and 2018 trip to South Africa. The orchestra will play those works at a later date. 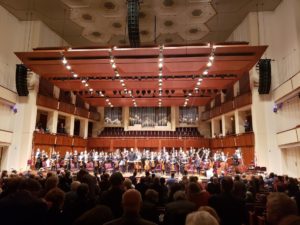 The decision was made after Japanese Prime Minister Shinzo Abe recommended that cultural events be canceled for the next two weeks as the coronavirus outbreak continues to spread. The Japanese government has also told schools to begin their scheduled spring break several weeks early and not reopen until April. There have been more than 200 cases reported in Japan and at least four deaths.

“We are deeply disappointed,” NSO Executive Director Gary Ginstling said in a statement. “After multiple consultations with officials at U.S. government agencies and recommendations from the Japanese government, it became clear that these evolving circumstances are beyond our control.”

“The National Symphony Orchestra has canceled three concerts in China, which were to conclude its Japan-China tour next month, over concerns about the coronavirus outbreak.

The shortened trip — the first international tour with Music Director Gianandrea Noseda — will now feature five concerts in Japan, including a performance in Hiroshima honoring the 75th anniversary of the end of World War II. The NSO is the first American orchestra to perform in Hiroshima in 50 years.”

After high-profile trips to Cuba and South Africa, the Minnesota Orchestra announced Thursday its next destinations: Vietnam and South Korea.

“No orchestra has done the amount of collaborations and exchanges we’re planning,” said Neeta Helms, president of Classical Movements, the touring company that worked with the Minnesota Orchestra on its 2015 tour of Cuba and 2018 trip to South Africa. The Virginia-based company, which will act as creative adviser for Vietnam, is whittling the list of possible cities in which the orchestra might perform.

As the first orchestra to travel to South Africa, the Minnesota Orchestra did much more than just play in historic concert venues – they worked side-by-side with young musicians in an equal learning exchange.

“Neeta Helms, Founder and President of Classical Movements, has made a deliberate effort to take ensembles to frequently overlooked destinations.”

“Kinan Azmeh came back to Benaroya Hall to perform as the soloist in his ambitious new work, commissioned for the Seattle Symphony by Classical Movements.”

“Neeta Helms of Classical Movements has been a pioneer of cultural diplomacy for more than 26 years. Be it the Soviet Union, China, Cuba, Vietnam or the Balkans in the early 1990s, South Africa immediately after apartheid, Iraq during the 2003 invasion or Myanmar this decade, Classical Movements produces trailblazing tours for orchestras and choirs to 145 countries, including the Minnesota Orchestra’s recent tours to Cuba and South Africa. Relentlessly pursuing meaningful collaborations—whether with refugees, under-served musicians or overlooked nations—Classical Movements also commissions brand-new music for the world’s most celebrated performers and donates to hundreds of organizations and causes that are important to all life on Earth.”

“Presented on Friday by Classical Movements at St. Mark’s Episcopal Church on Capitol Hill, the concert marked the feast day of Our Lady of Montserrat, patroness of the beleaguered region of Catalonia.”

“It took two and a half years for Classical Movements, a Virginia-based company with intimate knowledge of South Africa, to finalize the details. I describe the 14 members of the staff as miracle workers.”

“An innovative partnership that reflects the two organizations’ shared values, Classical Movements’ multi-year commitment will support the programs and services provided by Chorus America and the creation of new choral repertoire for the benefit of the entire field.”

“Handling those challenges is Classical Movements, a Virginia-based company that has arranged some 250 concerts in South Africa since 1994.”

“The sheer exuberance of the opera was deftly handled by the young artists of the Prague Summer Nights Festival…no shortage of knockouts, who will no doubt go on to bare their gifts before future audiences.”

“In all, this production made for a sensational showcase of the Prague Summer Nights Festival’s young artists…there’s much to look forward to in the coming years as they further their craft and passion.”

“Classical Movements‘ 10th annual Ihlombe! festival will feature new works composed by celebrated South African composers who have woven the poignant words of the great leader into the songs that will be performed.”

“The Serenade! festival – which has showcased more than 85 choirs from countries ranging from Norway to Zimbabwe in the past eight years – got under way this week, just as the US supreme court upheld the travel ban.

Syrian Children’s Choir Will Not Perform At U.S. Festival Because Of Travel Ban
Audie Cornish, NPR’s All Things Considered | June 27, 2018

“Those looking to engage with the legacy of this singular civil rights leader in 2018 can look forward to Classical Movements‘ Ihlombe! South African Choral Festival, which will take place across four of South Africa’s most major cities from July 1-20 and remember Mandela through song.”

“Classical Movements, the Alexandria-based company that is making the tour arrangements, also commissioned an original work by an African composer, Bongani Ndodana-Breen, with texts by Mandela, that the orchestra will perform alongside Beethoven on its five tour stops — including a concert in Soweto, the township where Mandela once lived, and a famous site in the struggle against apartheid.” 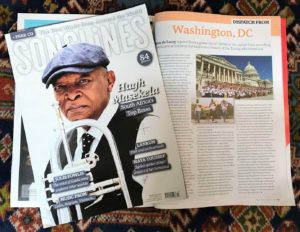 “Classical Movements‘ Serenade! is a majestic showcase of what can be achieved through collaboration, and a most welcome reminder that we all have a voice, and that the glory of song can resoundingly reaffirm a common sense of humanity, the world over.” 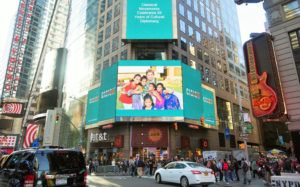 “From Abu Dhabi to Zimbabwe, Classical Movements‘ unique range of destinations across six continents offers orchestral and choral clients myriad opportunities to fully experience exotic cultures from those far corners of the globe, while bringing clients’ own culture to the places they’re visiting, allowing for the best of both countries to be exchanged.”

“Classical Movements‘ Neeta Helms had started her day the night before with two messages from Spain and the Netherlands inquiring about details of future concerts.”

“While Americans are celebrating Labor Day on Monday, several CSO musicians will be playing a free concert for refugees in Utrecht, The Netherlands…The event is being presented by Classical Movements, the U.S. tour company that made the orchestra’s travel arrangements. Said the company’s president Neeta Helms, ‘Together with the CSO, we are honored to be able to offer these refugees the sound of hope during a time of discord.’”

“It’s much like taking lessons within a living, breathing music-history museum. If you think it sounds both dreamy and intense, you’re 100 percent correct.”

“Seen from close up, Prague Summer Nights offers its students everything to establish itself as a formative training program for young musicians.”

“Before the final set, all the choruses proceeded down the aisles of the Concert Hall, waving glow sticks, and took the stage, more than 300 strong, accompanied by an African drum, an Indian tabla and a Mongolian stringed instrument: perhaps the most genuinely international ensemble I’ve ever heard, apart from the Olympic Games.”

“Have you ever wondered how entire orchestras and their staff are seamlessly moved from country to country when they are on tour? Neeta Helms and Classical Movements are the behind-the-scenes wizards who organize 55-70 symphony and choral tours each year.”

‘Everybody has a voice’: Festival finds the universal in choirs
Agence France-Presse | June 29, 2017

“The Serenade! festival in Washington is bringing together top-tier choirs from a dozen countries in a bid to show music’s universality — how the joy of singing together transcends cultures.”

“The program opened with something new. ‘The Game,’ composed by Christopher Theofanidis, is the last of the BSO Centennial Commissions spearheaded by the Eric Daniel Helms New Music Program. Dedicated to writer David Simon, the piece is based on a theme song used on his HBO show ‘The Wire’ — ‘Way Down in the Hole’ by Tom Waits.”

“This was the 30th NSO tour led by the Alexandria-based company Classical Movements, which specializes in tours for orchestras and choruses. The two full-time staffers it sent to Russia were fully occupied with travel logistics. What do you do when most of the orchestra’s luggage fails to make a tight plane connection and the authorities insist all the musicians have to come out to the airport, with their passports, to claim their bags?”

Meet the woman who is driving a new era of choral music in India
Adila Matra, India Today | March 22, 2017

“The Syrian clarinetist and composer Kinan Azmeh, who struggled to get back to his US home during the Trump travel ban, has been named composer-in-residence at Classical Movements.”

“Notable among those vendors was Classical Movements, a company that plans and runs tours for orchestras and choirs. It’s an impressive outfit, in charge of the Minnesota Orchestra’s historic tour of Cuba last year; it also runs music festivals in places ranging from Washington, D.C., to South Africa, giving to local communities as well as helping musical ensembles.”

A Life of Music and Travel: Neeta Helms, Her Father, and His Legacy
Serenade Magazine | October 13, 2016