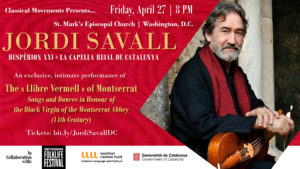 In collaboration with Smithsonian Folklife Festival, Institut Ramon Llull and Government of Catalonia

Falling on the night of the feast of Our Lady of Montserrat, maestro Savall will direct his longtime Catalonian collaborators in the 10 exquisite works that comprise the Cançoner montserratí—the Medieval songbook composed for pilgrimages to the Santa Maria de Montserrat monastery and dedicated to the Black Madonna, herself.

In addition to housing the only extant manuscript of the Llibre Vermell de Montserrat, the venerated Benedictine abbey perched atop the craggy Catalan cliffs is home to Escolania de Montserrat, one of the oldest boy choirs in Europe, who have thrilled and delighted Washington-area audiences twice before, both concerts presented by Classical Movements.

Last appearing at the Library of Congress in February, 2017 with a concert of historically-informed Venetian music, Jordi Savall returns to Washington, D.C. with yet another expertly researched program focused on this singular collection of songs and dances—perhaps the most enduring work of early music literature. Together with Hespèrion XXI and La Capella Reial de Catalunya, Savall will lend style and distinction to these compelling Catalan, Occitan and Latin songs, still aglow with spiritual ardor and communal joy more than 600 years later.

From June 27–July 1 and July 4–8, 2018, the Smithsonian Folklife Festival will present its 2018 Catalonia: Tradition and Creativity from the Mediterranean program, featuring performances, workshops, conferences and presentations on fields including cuisine, folk celebrations, crafts, music, visual arts, dance and other traditions. In light of the festival, Institut Ramon Llull, a public institution dedicated to promoting Catalan culture abroad, has developed a parallel program of Catalan literature, music and performances in Washington, D.C., starting this spring and ending in the fall of 2018.

For more than fifty years, Jordi Savall, one of the most versatile musical personalities of his generation, has rescued musical gems from the obscurity of neglect and oblivion and given them back for all to enjoy. A tireless researcher into early music, he interprets and performs the repertory both as a gambist and a conductor. His activities as a concert performer, teacher, researcher and creator of new musical and cultural projects have made him a leading figure in the reappraisal of historical music. Together with Montserrat Figueras, he founded the ensembles Hespèrion XXI (1974), La Capella Reial de Catalunya (1987) and Le Concert des Nations (1989), with whom he explores and creates a world of emotion and beauty shared with millions of early music enthusiasts around the world. With his essential contribution to Alain Corneau’s film Tous les Matins du Monde, which won a César for the best soundtrack, his busy concert schedule (140 concerts per year), his recordings (6 albums per year) and his own record label, Alia Vox, which he founded with Montserrat Figueras in 1998, Jordi Savall has proved not only that early music does not have to be elitist, but that it can appeal to increasingly diverse and numerous audiences of all ages. As the critic Allan Kozinn wrote in The New York Times (2005), his vast concert and recording career can be described as “not simply a matter of revival, but of imaginative reanimation.” Savall has recorded and released more than 230 discs covering the Medieval, Renaissance, Baroque and Classical music repertories, with a special focus on the Hispanic and Mediterranean musical heritage, receiving many awards and distinctions such as the Midem Classical Award, the International Classical Music Award and the Grammy Award. His concert programmes have made music an instrument of mediation to achieve understanding and peace between different and sometimes warring peoples and cultures. Accordingly, guest artists appearing with his ensembles include Arab, Israeli, Turkish, Greek, Armenian, Afghan, Mexican and North American musicians. In 2008 Jordi Savall was appointed European Union Ambassador for intercultural dialogue and, together with Montserrat Figueras, was named “Artist for Peace” under the UNESCO “Good Will Ambassadors” programme. He has played a seminal role in the rediscovery and performance of Una cosa rara and Il burbero di buon cuore by the composer Vicent Martín i Soler. He has also conducted Le Concert des Nations and La Capella Reial de Catalunya in performances of de Monteverdi’s L’Orfeo, Vivaldi’s Farnace, Fux’s Orfeo ed Euridice and Vivaldi’s Il Teuzzone. Jordi Savall’s prolific musical career has brought him the highest national and international distinctions, including honorary doctorates from the Universities of Evora (Portugal), Barcelona (Catalonia), Louvain (Belgium) and Basel (Switzerland), the order of Chevalier de la Légion d’Honneur (France), the Praetorius Music Prize awarded by the Ministry of Culture and Science of Lower Saxony, the Gold Medal of the Generalitat of Catalonia and the prestigious Léonie Sonning Prize, which is considered the Nobel prize of the music world. “Jordi Savall testifies to a common cultural inheritance of infinite variety. He is a man for our time” (The Guardian, 2011).

Ancient music’s most important value stems from its ability as a universal artistic language to transmit feelings, emotions and ancestral ideas that even today can enthrall the contemporary listener. With a repertoire that encompasses the period between the 10th and 18th centuries, Hespèrion XXI searches continuously for new points of union between the East and West, with a clear desire for integration and for the recovery of international musical heritage, especially that of the Mediterranean basin and with links to the New World. In 1974 Jordi Savall and Montserrat Figueras, together with Lorenzo Alpert and Hopkinson Smith, founded the ancient music ensemble Hespèrion XX in Basel as a way of recovering and disseminating the rich and fascinating musical repertoire prior to the 19th century on the basis of historical criteria and the use of original instruments. The name Hespèrion means “an inhabitant of Hesperia”, which in ancient Greek referred to the two most westerly peninsulas in Europe: the Iberian and the Italian. It was also the name given to the planet Venus as it appeared in the west. At the turn of the 21st century Hespèrion XX became known as Hespèrion XXI. Today Hespèrion XXI is central to the understanding of the music of the period between the Middle Ages and the Baroque. Their labours to recover works, scores, instruments and unpublished documents have a double and incalculable value. On one hand, their rigorous research provides new information and understanding about the historical knowledge of the period, and on the other hand, the exquisite performances enable people to freely enjoy the aesthetic and spiritual delicacy of the works of this period. Right from the beginning Hespèrion XXI set out on a clearly innovative and artistic course that would lead to the establishment of a school in the field of ancient music because they conceived, and continue to conceive, ancient music as an experimental musical tool and with it they seek the maximum beauty and expressiveness in their performances. Any musician in the field of ancient music will have a commitment to the original spirit of each work and has to learn to connect with it by studying the composer, the instruments of the period, the work itself and the circumstances surrounding it. But as a craftsman in the art of music, he is also obliged to make decisions about the piece being played: a musician’s capacity to connect the past with the present and to connect culture with its dissemination depend on his skill, creativity and capacity to transmit emotions. Hespèrion XXI’s repertoire includes, amongst others, the music of the Sephardi Jews, Castilian romances, pieces from the Spanish Golden Age, and Europa de les Nacions. Some of their most celebrated concert programmes are Les Cantigues de Santa Maria d’Alfons X El Savi, La Diàspora Sefardí, the music of Jerusalem, Istanbul, Armenia and the Folías Criollas. Thanks to the outstanding work of numerous musicians and collaborators who have worked with the ensemble over all these years Hespèrion XXI still plays a key role in the recovery and reappraisal of the musical heritage, and one that has great resonance throughout the world. The group has published more than 60 CDs and performs concerts for the whole world, appearing regularly at the great international festivals of ancient music.

Following the model of the famous Medieval “royal chapels” for which the great masterpieces of both religious and secular music were composed on the Iberian Peninsula, in 1987 Montserrat Figueras and Jordi Savall founded La Capella Reial, one of the first vocal groups devoted to the performance of Golden Age music on historical principles and consisting exclusively of Hispanic and Latin voices. In 1990, when the ensemble received the regular patronage of the Generalitat of Catalonia, it changed its name to La Capella Reial de Catalunya. The newly formed ensemble specialized in the recovery and performance of historical principles of the polyphonic and vocal musice of Spain and Europe from the Middle Ages and Golden Age up to the 19th century. La Capella Reial de Catalunya shares with Hespèrion XXI the same artistic outlook and goals, rooted in respect for the profoundly spiritual and artistic dimension of each work, combining quality and authenticity regarding the style of the period with a careful attention to the declamation and expressive projection of the poetic text. The ensemble’s extensive repertory ranges from the Medieval music of the various cultures of the Mediterranean to the great masters of the Renaissance and the Baroque. The group has distinguished itself in various Baroque and Classical opera repertories, as well as in contemporary works by Arvo Pärt. The Capella Reial de Catalunya played on Jacques Rivette’s soundtrack of the film Jeanne La Pucelle (1993) on the life of Joan of Arc. In 1992, La Capella Reial de Catalunya made their opera debut accompanying all the performances of Le Concert des Nations. They have received various awards and distinctions in recognition of their more than 40 CDs. Under the direction of Jordi Savall, La Capella Reial de Catalunya pursue an intense programme of concerts and recordings all over the world, and since the ensemble’s creation it has regularly performed at the major international early music festivals.