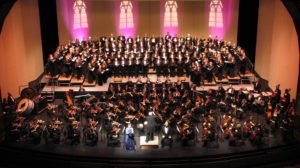 From May 29 to June 12, 2018, Classical Movements will present five inspiring performances (three full concerts, as well as two liturgical services) by the world-renowned Anchorage Concert Chorus (ACC) of Alaska—“said to lift listeners out of their seats,” Anchorage Daily News—on the storied American ensemble’s first-ever tour to Italy.

Currently celebrating his 25th season conducting the ACC, Artistic Director Grant Cochran has prepared yet another eclectic program for the 100-plus Alaskans to perform during their 15-day Italian tour: both traditional and contemporary sacred music befitting the country’s finest basilicas, featuring the award-winning soprano and University of Alaska-Anchorage professor Mari Hahn, as well as beloved Americana favorites sure to delight every audience, including Cochran’s own arrangement of Alaska’s state song.

Watch the trailer for ACC and Cochran’s historic Italian tour!

In Rome and Venice, maestro Cochran will lead the Anchorage Concert Chorus, accompanied by Janet Carr-Campbell, in evening Mass at St. Peter’s and St. Mark’s, respectively.

Then, just one hour outside Rome, ACC, Cochran and Carr-Campbell will travel to to Centro Mondo Migliore for a private outreach and exchange concert with the refugee community. Hailing from 24 different nations (most of them in sub-Saharan Africa), Italian officials are estimating that, come the end of May, the number of refugees living there at Rocca di Papa will number some 350 men, women and children.

Meanwhile, ACC’s concert in the northeastern Italian city of Pordenone will feature an exciting collaboration with the talented local ensemble Coro Montecavallo.

Finally, in Pavia in Lombardy, accepting an exclusive invitation from Festival Ultrapadum, the Anchorage Concert Chorus will give the opening night performance, accompanied by Orchestra Filarmonica dei Navigli.

On Wednesday, May 23 at 7:30 PM, on the stage of University of Alaska-Anchorage Recital Hall, ACC will perform a tour preview concert.

Read about ACC’s 2015 tour of Austria and the Czech Republic with Classical Movements. 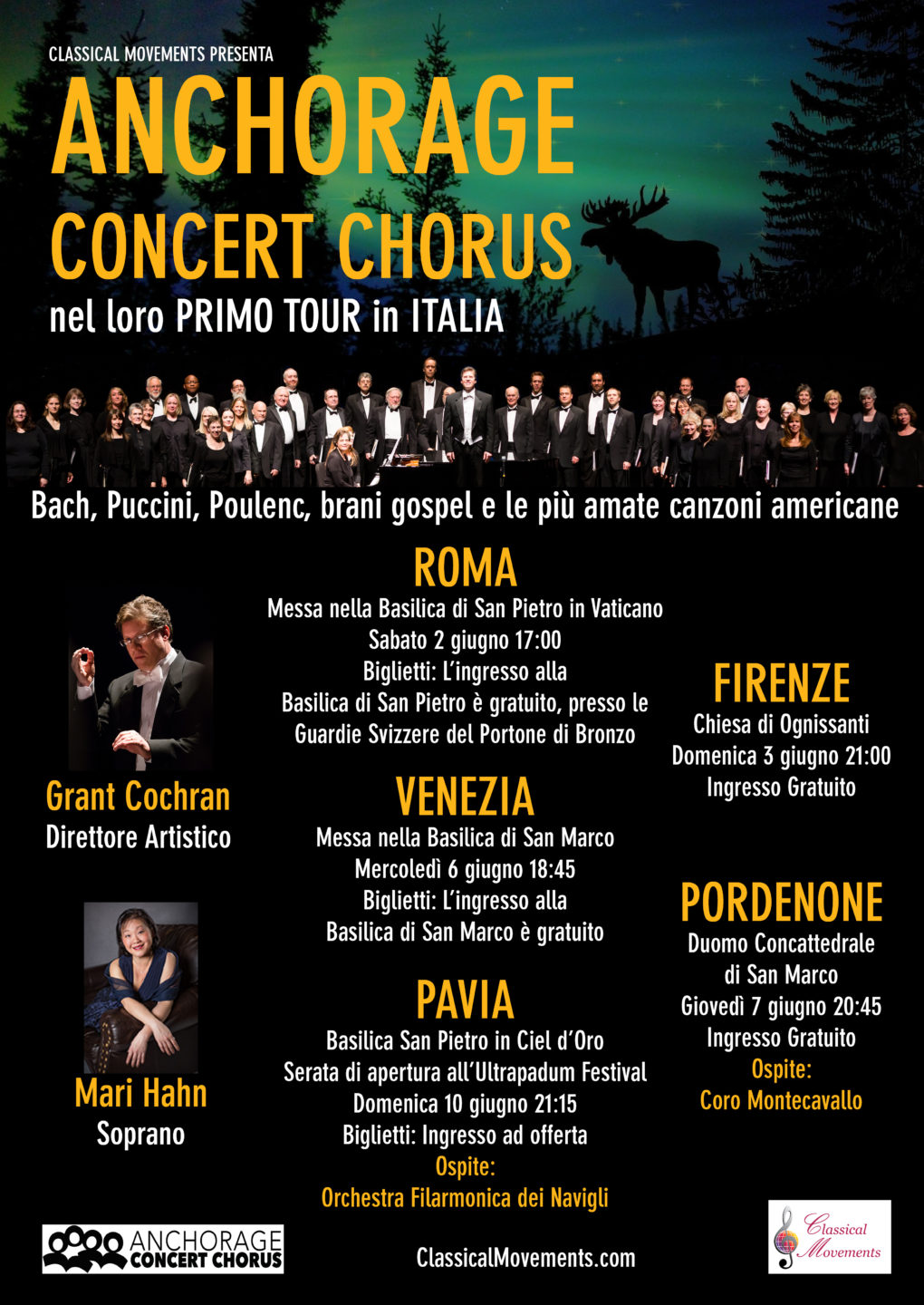 For more than 70 years, the Anchorage Concert Chorus has maintained a tradition of choral excellence in Anchorage and surrounding communities through world-class vocal performance, community events, and music education.  The Anchorage Concert Chorus is a recipient of the Eleanor Sullivan Humanitarian Award, presented by Soroptimist International of Anchorage, and the Governor’s Award for Outstanding Arts Organization. A Resident Company of the Alaska Center for the Performing Arts, the Chorus embraces a wide spectrum of choral music.  From major classical works to contemporary pops, the 160-voice chorus performs three concerts per season.  The Chorus also performs and competes internationally, with tours to the Czech Republic, Australia, New Zealand, Russia, Great Britain, Canada, Brazil and Venezuela.  In 1996, at the renowned Eisteddfod Festival in Wales, the Chorus placed 5th in the international mixed chorus competition. Since 1992, the Anchorage Concert Chorus has been under the artistic direction of Baltimore native, Dr. Grant Cochran.  A Yale University School of Music graduate, Dr. Cochran holds a Doctorate of Musical Arts degree in choral conducting.  He appears as music director and accompanist for various opera and theatre companies, including the Young Victorian Theatre Company in Baltimore, the Musical-Theatre Company of Cambridge in Boston and the Strand Theatre in New Haven, Connecticut.  Dr. Cochran is also the first person to hold the full-time choral-faculty position as Assistant Professor of Music at University of Alaska Anchorage, and serves as the Chairperson for the University Music Department. The Chorus has performed continuously since 1947 presenting major choral works, operettas, selections from Broadway, as well as many pop, rock N roll and gospel pieces.  They have performed with internationally known artists including Gregory Hines, Judy Collins, Blake Stern, and The Chieftains.  They have also performed on the Ed Sullivan Show, Prairie Home Companion, and Bing Crosby’s Radio Show.  Their current season consists of three performances at the Alaska Center for the Performing Arts and about 10 other community performances. 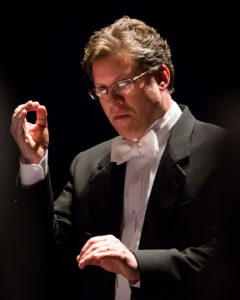 Baltimore native Grant Cochran received his undergraduate education at Trinity College (CT). His graduate study was completed at the Yale University School of Music, where, as valedictorian of his Master of Music class, he went on to earn the Doctorate of Musical Arts degree in choral conducting. In 1992, Dr. Cochran accepted the position of Artistic Director and Conductor of the Anchorage Concert Chorus. During his tenure, the Concert Chorus has collaborated with all of the major arts organization in Anchorage as well as with various orchestras from both the lower 48 and abroad. The Chorus has also shared the stage with a range of acclaimed artists including Jerome Hines, Judy Collins, Ethos Percussion Group and the Chieftains. In addition to his appointment as conductor of the 160 voice Concert Chorus and its 45 voice Chorale ensemble, Dr. Cochran serves on the faculty of the University of Alaska Anchorage as Assistant Professor of Music and as the Chairperson of the Music Department. Dr. Cochran is also a published composer with the E. C. Schirmer Music Company (Boston). He lives in South Anchorage with his wife, Lorna, and their four children.

Associate Professor Mari Hahn has been on the UAA Music Department faculty since 2002.  She received her Doctorate of Musical Arts and Masters of Music from the University of British Columbia, and her BM Performance degree from the University of Toronto.  She also studied at the Scuola Musicale and privately in Milan, Italy.  She was a two-time recipient of the prestigious Killam Fellowship at UBC, and founded a chamber opera company, Opera Breve, in Vancouver, British Columbia. She remains active as versatile performer of opera, oratorio and art song.  Recent performances include the soprano solo in Gorecki’s Third Symphony with the Anchorage Civic Orchestra, Bach’s St. John Passion and the Defiant Requiem with the Anchorage Concert Chorus under Murry Sidlin.  She has performed in numerous solo and chamber recitals, including the Anchorage Festival of Music, the UAAEarly Music Ensemble with John Lutterman, and with guitarist Armin Abdihodzic. 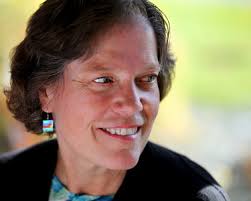 Janet Carr-Campbell, the co-founder and Artistic Director of The Music Machine, helps to enrich the lives of Anchorage’s youth through her gift of music. She is a producer, composer, arranger, teacher, pianist, organist, vocal coach and director.  An Oberlin Conservatory of Music graduate, Janet moved to Anchorage in 1980 after winning the National Liberace Keyboard Entertainer Award. Along with business partner, Darl Schaaff, they formed Jan Dar Productions and gave the Anchorage community 11 years of fun-filled musical entertainment. She has directed many Artists in the Schools residencies, collaborates with the Anchorage Concert Association, Anchorage Symphony, Cyrano’s, Russian American Colony Singers, University Singers, and is the organist and Children’s Music Director at First United Methodist Church. Janet cues the surtitles for all Anchorage Opera productions, and is the accompanist for the Anchorage Concert Chorus and many vocalists. In 1987, she was featured on “Jay Hammond’s Alaska” television show; she received the 2001 Chamber of Commerce Gold Pan Award, the Mayor’s Arts Award in 2003, and the Alpha Kappa Alpha Sorority “Unsung Hero” award in 2003.  In December of 2011, Janet was honored as a YWCA Woman of Achievement.