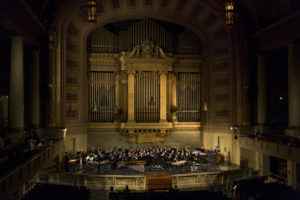 From 24 May to 2 June 2018, the 55-member Yale Concert Band will tour Australia for the first time ever in its 100-year history, featuring four collaborative concerts in Melbourne, Canberra, Sydney and Newcastle.

Under the baton of Dr. Thomas C. Duffy, Yale Concert Band will be debuting on their sixth continent with an expertly curated program that celebrates Leonard Bernstein‘s own centennial, wind ensemble classics by everyone from Sousa to Hindemith to Maslanka, as well as the world premiere of Dr. Duffy’s reconstruction of Bellpiece, the last, unfinished work composed by Melbourne’s native son, Percy Grainger.

Joined on stage by three local collaborators—Royal Australian Navy Band (Melbourne), Band of the Royal Military College (Canberra) and Sydney Wind Ensemble—all ticket proceeds from Yale’s joint performance in Melbourne, as well as the collaborative gold coin concert in Canberra, will be donated to Legacy, a charity providing services to Australian military families suffering after the injury or death of a spouse or parent. The joint gold coin concert in Sydney will benefit both the Hush Foundation, which aims to transform the culture of health care through the arts, and Children’s Hospital at Westmead, the largest pediatric center in New South Wales.

Give Us This Day
David Maslanka 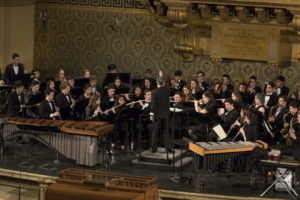 The Yale Concert Band is made up of approximately fifty-five brass, woodwind, keyboard and percussion players, predominantly from the undergraduate population at Yale.  Its repertoire consists of the entire range of wind music, from such chamber pieces as the Strauss Serenade, Op. 8 and the Stravinsky Octet to larger ensemble music, including marches, suites, popular band music and the newest music available. The Concert Band is known throughout the country and the world for its performances of traditional and unusual music in a variety of settings. It has received critical acclaim for such projects and performances as its 1979 historical recreation of John Philip Sousa’s Band (Carnegie Hall, New York); its 1993 collaboration with Walter Cronkite to present the music of the American Civil War for Black History Month and Abraham Lincoln’s Birthday; its compact disc release on the Denon label (music recorded in Japan during the Concert Band’s 1987 concert tour); performances throughout Italy in 1989; performances at the Royal Albert Hall and St. Johns Smith Square in London in 1992; the 1994 re-creation of Glenn Miller’s Army Air Force Band to commemorate the 50th anniversary of the D-Day landing at Normandy and, by popular demand, its numerous repeat performances;  the premiere of Percy Grainger’s last band piece, reconstructed by Director of Bands Thomas C. Duffy; the U.S. premiere of an undiscovered 1930 march by John Philip Sousa, and, to date, four combined concerts with the United States Coast Guard Band.

The band has been selected to perform at conventions of the College Band Directors National Association, the most recent being in 2008 in Washington D.C., at the U. S. Marine Corps Band Head-quarters. Also in 2008, the Yale Concert Band and the Morgan State University Symphonic Winds completed the first exchange of concert bands between a Historically Black College/University (HBCU) and a non-HBCU school.

2018 marks the Band’s centennial year. No strangers to international travel, this will be their first trip to Australia and 6th continent. 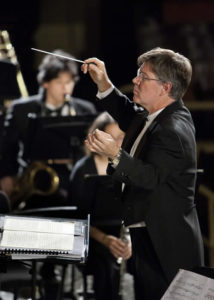 Dr. Thomas C. Duffy is Professor (Adjunct) of Music and Director of University Bands at Yale University, where he has worked since 1982. In 2017, he was appointed Clinical Professor in the Yale School of Nursing. He has established himself as a composer, a conductor, a teacher, an administrator, and a leader. His interests and research range from non-tonal analysis to jazz, from wind band history to creativity and the brain. Under his direction, the Yale Bands have performed at conferences of the College Band Directors National Association and New England College Band Association; for club audiences at NYC’s Village Vanguard and Iridium, Ronnie Scotts’s (London), and the Belmont (Bermuda); performed as part of the inaugural ceremonies for President George H.W. Bush; and concertized in nineteen countries in the course of seventeen international tours. Duffy produced a two-year lecture/performance series, Music and the Brain, with the Yale School of Medicine; and, with the Yale School of Nursing, developed a musical intervention to train nursing students to better hear and identify body sounds with the stethoscope.  This intervention (the Duffy-Honan Intervention) was awarded the Robert Woods Johnson Innovations In Nursing Award in 2015. He combined his interests in music and science to create a genre of music for the bilateral conductor, in which a “split conductor” must conduct a different meter in each hand, sharing downbeats.

His compositions have introduced a generation of school musicians to aleatory, the integration of spoken/sung words and “body rhythms” with instrumental performance, and the pairing of music with political, social, historical and scientific themes. He has been awarded the Yale Tercentennial Medal for Composition, the Elm/ Ivy Award, the Yale School of Music Cultural Leadership Citation and certificates of appreciation by the United States Attorney’s Office for his Yale 4/Peace: Rap for Justice concerts – music programs designed for social impact by using the power of music to deliver a message of peace and justice to impressionable middle and high school students.

From 1996 to 2006, he served as associate, deputy, and acting dean of the Yale School of Music. He has served as a member of the Fulbright National Selection Committee, the Tanglewood II Symposium planning committee, the Grammy Foundation Music Educators Award Screening Committee, and completed the MLE program at the Harvard University Institute for Management and Leadership in Education. He has served as: president of the Connecticut Composers Inc., the New England College Band Directors Association and the College Band Directors National Association (CBDNA); editor of the CBDNA Journal, publicity chair for the World Association of Symphonic Bands and Ensembles; and chair of the Connecticut Music Educators Association’s Professional Affairs and Government Relations committees. For nine years, he represented music education in Yale’s Teacher Preparation Program. He is a member of American Bandmasters Association, American Composers Alliance, the Connecticut Academy of Arts and Sciences, Connecticut Composers Incorporated, the Social Science Club, and BMI. Duffy has conducted ensembles all over the world and most recently was selected to conduct the 2011 NAFME National Honor Band in the Kennedy Center, Washington, D.C.

The Royal Australian Navy Band Melbourne is based at HMAS Cerberus, Westernport, Victoria. The Band consists of 33 full-time members under the musical direction of Lieutenant Andrew Stokes, and is complemented by a number of Naval Reserve Musicians as required. RAN Band Melbourne provides musical support for Navy ceremonies, events and deployments, and is a highly professional public relations asset to the Royal Australian Navy. All members of the Band perform in the Parade Band and Concert Band with the majority also performing in a variety of smaller ensembles including Big Band, Jazz Group, Rock Band and Brass or Wind Quintets. In addition to supporting ceremonial occasions, RAN Band Melbourne also performs at many public events throughout Melbourne and Victoria, including school concerts, community music festivals, local commemorative services and large sporting events. In short, RAN Band Melbourne is an extremely versatile group of talented musicians who are proud to serve the nation in the finest traditions of the Royal Australian Navy Band.

The Band of the Royal Military College, often referred to as RMC Band or the Duntroon Band, is based in Canberra. Its role for the Army and the Australian Defence Force is predominantly ceremonial in support of Vice-Regal and government agencies, Defence Headquarters and the Royal Military College, but off the parade ground it performs as a concert band and has a variety of smaller ensembles as well. The band’s deployments have included support to OP BELISI II – Peace Monitoring Group – Bougainville, OP WARDEN – International Force East Timor (INTERFET) and OP ANODE – Regional Assistance Mission to the Solomon Islands. International engagements have included representing Australia in Paris for the 50th Anniversary of Armistice Day in 1968, ceremonial activities in London commemorating the Centenary of Federation in 2000 and ceremonial duties at Gallipoli on Anzac Day 2003. In support of the community, the band is a respected participant in the arts life of Canberra. In addition to concerts at many of Canberra’s national institutions, the band is well known for its regular Music at Midday series held at the Canberra Theatre. This series commenced in 1993 and has raised in excess of $300,000 for local charities.

Sydney Wind Symphony was formed in 1985 by Victor Grieve and the City of Sydney council as an activity associated with the International Year of Youth.  The ensemble, then known as the City of Sydney Youth Festival Concert Band, was so successful, it reformed the following year as City of Sydney Bicentennial Band. Nowadays, this leading community ensemble attracts talented professional and amateur musicians from across metropolitan Sydney to perform a broad and challenging repertoire that includes works by traditional and modern-day composers. The ensemble is led by Music Director Mark Brown.

Legacy is a voluntary organisation providing services to around 70,000 families of veterans who have died or given their health. Today, Legacy’s caring and compassionate service assists over 65,000 widow(er)s and 1,800 children and dependents with a disability.

The Hush Foundation was established in 2000 by highly-awarded and renowned physician Dr. Catherine Crock AM, in response to her work with children undergoing painful medical procedures at the Royal Children’s Hospital Melbourne. Working with patients, families and healthcare professionals, Hush Foundation transforms the culture of healthcare by harnessing the power of the arts to educate, inspire and create change for better outcomes for everyone.