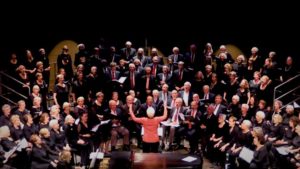 As featured in the February, 2018 New York Times article:
“Singing Their Way Through Retirement“

From 30 May until June 3, 2018, Classical Movements will present ENCORE CHORALE, on their debut tour of Quebec and Canada. 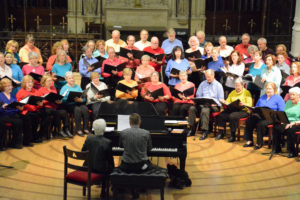 Encore Chorale is dedicated to providing an excellent and accessible artistic environment for older adults, 55 and over, regardless of experience or ability, who seek arts education and performance opportunities under a professional artist. Currently comprised of numerous individual choirs around the United States, its members come together regularly to host workshops, go on tours, and present joint concerts. The group is led by its Founder and Artistic Director, Jeanne Kelly.

The Encore dream began to take shape  in September 2001, when the late internationally-renowned gerontologist Dr. Gene Cohen, asked Jeanne Kelly to be part of a study on The Impact of Professionally Conducted Cultural Programs on the Physical Health, Mental Health and Social Functioning  of Older Adults, since published in 2006. The study would necessitate forming two chorales for older adults over 65 years of age to join forces.

Continuing from this genesis, in 2007 Jeanne Kelly formed a nonprofit organization, Encore Creativity for Older Adults, as she knew this was the age group that excited her most and where she could do her most meaningful work. In fact, today the average age of an Encore member is 80 years young!

In 2008, Encore Chorale helped launch multiple satellite groups, including a new program, Dance and Movement, under the direction of Ms. Tiffany Haughn. In December of 2008, all Encore Chorales combined to put on a spectacular performance on the Millennium Stage of the Kennedy Center in Washington, DC. The Millennium Stage has since become a tradition for the group.

Encore has continued to grow and now, in 2018, Encore has 21 chorales in the Washington, DC, area, with affiliate chorales in Ohio, Pennsylvania, Colorado, California, and Illinois, including two chorales in Denver, one in Los Angeles, and seven in Chicago.  The combined membership of these chorales now exceeds 1,100 singers.  With the introduction of is new rock and roll chorus, ENCORE ROCKS, in the fall of 2015, the pace of growth continues to accelerate.

2018 will see the launch of two groups in New York City, as detailed in a March 2018 article, “Singing Their Way Through Retirement” by the New York Times. The Chorale’s repertoire is broad, including sacred and classical works, spirituals and folk music, Broadway and jazz, and everything in between. One of the new groups in New York is the introduction of a rock’n’roll choir, ENCORE ROCKS.

Encore Chorale offers an opportunity to those who have not sung in years to take up singing again. It provides a space for singers to continue to exercise their passion, as well as offering a welcoming environment to those who have never sung before and wish to have a new artistic outlet. 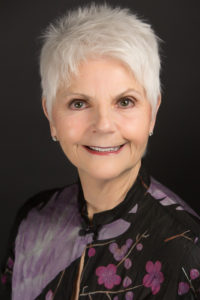 Jeanne Kelly’s career of over forty years has produced a unique blend of experience as a vocal performer, teacher, conductor, and music administrator that has prepared her well to serve as the Founder and Artistic Director of Encore Creativity for Older Adults. As a performer, Ms. Kelly made her professional operatic debut with the Washington Opera at the Kennedy Center.  She has also performed major roles with the Baltimore Opera, Opera Delaware, Central City Opera, Tulsa Opera, Annapolis Opera, and the New York City Opera Education Department. She also appeared in the world premiere of Rappaccini’s Daughter with the Pennsylvania Opera Theater. In addition to having maintained a private voice studio in Maryland and Virginia, Ms. Kelly served on the faculties of the Levine School of Music, Washington, DC; Hood College, Frederick, Maryland; and the Baltimore School for the Arts. Ms. Kelly served as conductor of the Women’s Glee Club at the United States Naval Academy, Annapolis, Maryland, and the Georgetown University Concert Choir. She was Executive Director of the Houston Conservatory of Music and, from 1997 until 2007, was Executive Director of the Northern Virginia Campus of the Levine School of Music. Ms. Kelly earned an undergraduate degree in voice performance and piano from the University of Findlay, Ohio, and a master’s degree in voice performance from the Peabody Conservatory Baltimore. 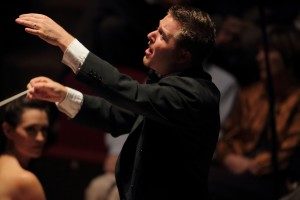 Encore is privileged to have Jeffrey Dokken as a member of our distinguished faculty of choral conductors. Mr. Dokken has served as an Encore conductor since 2013 and in September 2016 was named Encore’s Associate Artistic Director. He leads the Alexandria Encore Chorale and also conducts the new ENCORE ROCKS rock n roll choruses.  Additionally, he shares conducting duties with Jeanne Kelly at the Glen Echo Chorale. Mr. Dokken is a vibrant conductor, composer, and musician. Over the past decade, he has performed all across the United States, and in some of America’s greatest venues including the Kennedy Center and Carnegie Hall. In October, 2011, Mr. Dokken travelled to Guayaquil, Ecuador to sit on an elite three-member international adjudication panel for the Guayaquil Symphony Orchestra, the national orchestra of Ecuador. The past two years, Mr. Dokken has had the distinct pleasure of getting to conduct in the White House in Washington D.C. as a part of “Holidays at the White House.”